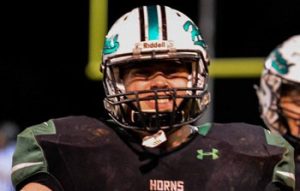 @Ethan_Stewart67
Meet one of the most dominant linemen in Class 2A, Jones High School’s Ethan Stewart, a physically dominant OL that makes his team better every time he steps on the field. We look for him to be one of the more dominant players in class 2A this season and his size and ability make him a great combo package and one of the best linemen in 2A.

Ethan – I attended many camps this summer Including OSU, OBU, Emporia State, and Bixby it was an incredible experience and I was able to build connections with many people

Six star football – What colleges have been looking at you

Ethan – Not Afraid by Eminem

Six star football – Teammate to keep an eye on