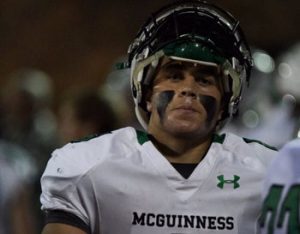 @Evan_ille
Every contending team and championship caliber program has players that have the talent and are dedicated to putting the work in for the success to come. OLB and class of 2020 standout Evan Ille of Bishop McGuinness is one such player. The hard nosed backer racked up 72 total tackles with 7 sacks and 7 tackles for loss his junior campaign for the Fighting Irish. Also a special teams terror, Evan blocked 3 punts and had an interception. What Ille lacks in size he makes up for in quickness and smarts. Eva is a player that plays with 100% effort and uses his quickness and agility to his advantage. Also not all afraid of contact and Evan is a player that will certainly force the issue himself.

Evan – in my life has definitely been my dad.

Evan – I wasn’t able to attend any camps over the summer but I went through our Irish pride strength and conditioning summer workouts. I really improved on my strength, but also my awareness and ability to read plays and formations a lot faster.

Evan – Before game I just like to relax and play catch with another teammate just to calm the nerves and get ride of some of the nervous energy.

Evan – My favorite song to listen to before games is From the D to the A.

Evan – My best game this last year was against Piedmont High School where I was able to block two punts in the same game.

Six Star Football – Teammates that could be college stars

Six Star Football – teammate to keep an eye on

Evan – I also think Aaron Beck is a player to watch.