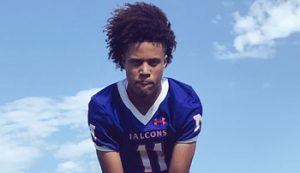 @IamEvanRichmond
One of the biggest sleepers and yet a potential impact player in 2A-7 very well could be two sport 6-3 basketball player and up and coming Evan Richmond, a mismatch for smaller DBs and a big time weapon for the new Millwood QB for 2019.

Evan has a great work ethic that sets him apart from other players. As well as his attitude I’m always encouraging others and staying positive on the field. Evan can play multiple positions. This year he played TE/WR and some DE. Millwood used him this year at a lot of TE, being a possession catcher. Richmond was playing with a pretty stacked offense this year so he did a lot of blocking.

Evan – in my life I would say is my father.

Evan – I attended my first elite camp this past summer at Oklahoma State. It was a great experience for me to see where I am compared to other players and the things I can improved on.

Six star football – what colleges are looking at you

Evan – I’ve been on one unofficial visit to Howard University where I received my first offer. Howard is still the only school that has offered me but I’m excited about this off-season & summer for my recruitment to heat up. I’m always looking to perfect my craft with that being route running, catching, my speed and my flexibility. A key thing for me this offseason is putting on more muscle.

Six star football – Teammate that could be star on next level ?

Six star football – Player to keep an eye on?