Choctaw's Johnson a player that will make you pay on both sides of the ball!! 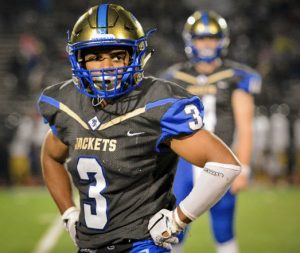 @Gabe_johnson01
One of the most talented players on both sides of the ball you will find, meet standout junior DB and WR Gabe JohnsonGabe
Johnson
DB | 5'9 | 160
Choctaw | 2020 of Choctaw.

He plays both sides of the ball equally well and posted 3 interceptions one for a pick six. Also had 2 kick off returns, 4 receiving touchdowns and had 400 receiving yards. He can do it all, you name it he is the type of player that makes his team go and a leader and athlete who you can count on the make a big difference. Johnson has taken unofficial visits to Tulsa and UCO. This slot receiver is very shifty and runs good routes with break away speed. At DB Gabe plays bigger than what he is and can make plays on the ball.

Gabe—Junior season went pretty good dealt with some injury’s in the beginning so I only played defense but finished out strong on all phases of the game.

Six Star —the most influential person

Gabe—In my football life would be my Dad he’s always pushed me to be the best.

Gabe— I attended a lot of camps this summer and learned to compete the camps I went to were UCO ,Texas A&M Commerce , Tulsa , and Southwestern.

Six Star —What schools would you like to play at

Six Star —Hardest working teammate/Player to keep an eye on