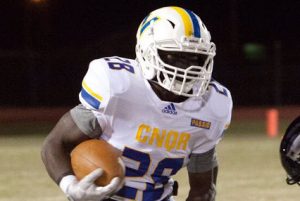 @GabrielByrams
Always making the extra yards needed, always finding a way to find the end zone, just getting enough yards for move the chains again…Meet Victory Christian star running back Gabriel Byrams, a player that knows how to make the most out of very play.Despite being just 5-6, Byrams is one of the most electrifying backs in the Tulsa area and one you have to keep an eye on.

Gabriel—During summer I really took the time to work and improve my game. I went to OU, TSU, and KSU’s camps. I learned that footwork is everything from all three camps! It was great getting to know other guys at my position and learning from them as well.

Gabriel—I feel like I definitely increased my speed, I improved my vision and footwork as well. I can tell the difference in games.

Gabriel—Currently still waiting on interest from colleges. I am interested in attending OU, OSU, TU, TSU, and KSU.

Gabriel—Meditate on the positive things I’m about to do before the game.