Rubio making his own mark on the game. 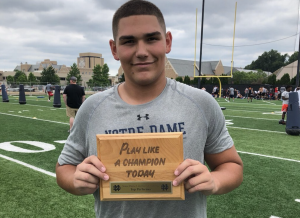 A 6’5, 275-pound defensive lineman, Rubio is quick at the point of attack and plays with relentless power, throwing every move with violent intentions.

He got a lot of varsity run as a freshman, recording 36 tackles as he helped a young team go 6-5, but was just scratching the surface of his potential.

“Coming in as a freshman and earning starting varsity positions on offense and defense was a little unnerving,” he says.  It took me a bit to get used to the tempo and speed of the game.  Overall, I am pleased with my play, but not satisfied.  I’ve got a lot more in me.

“I now know what to expect and how to succeed at the varsity level.”

Rubio says his dad has helped guide him as a former defensive tackle and helped him prepare for both the football field and the class room.

“His experience being a college all American and former pro defensive tackle has allowed me to work on things that he knows I’m gonna need in order to dominate on the line and in the classroom,” Rubio says.

This off season, Rubio has committed to getting more explosive and has already seen his hard work pay off as he is quicker off the ball and has more violent hands.

“As my summer progresses I’m going to focus on block recognition so that I can react better to my opponents,” he says.

Rubio says he tries to compete in at least three college camps and a handful of combines as well. This year he was invited to the Blue Grey Combine where he earned D-Line MVP, and he also attended the Elite Football Combine and performed well.

He competed at the Lindenwood mega camp and was doing well before it got rained out, and also was invited to camps by Kentucky, Northwestern and Michigan State, but couldn’t attend.

He did get to recently camp at Notre Dame and earned Defensive Top Performer and says he plans to attend camp at Southeast Missouri and Western Illinois in July.

“I view every camp as an opportunity to showcase my skills and earn a scholarship,” he says. “I feel like I get better and better with every camp/combine I attend.”

While he does not yet hold any offers, Rubio has received interest from every school that has seen him compete, including Mizzou, Missouri State, SEMO and most recently Notre Dame where he camped.

“I haven’t been offered by anyone yet … and don’t really mind,” Rubio says. “I don’t need 40-plus offers. Only one from the right school, with the right program and the right position coach.

“I’m enjoying competing and beating up on juniors and seniors!”