Eagan, a player making an impact in every aspect for Chisholm High School 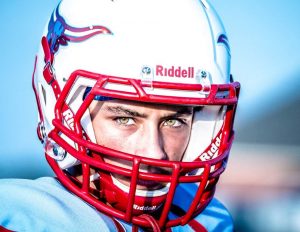 Its no question his determination makes him a special teams standout. “My goal is to always beat the ball to the receiver and to always be the first one on my team downfield. “ said Eagan. In 2017 Garett had 2 recovered balls on kickoff in one game a long with a kickoff tackle, and lots of hustle tackle plays on kickoff. “ I put everything into kickoff last year because I did not start and that was my chance to show coach what I can do on the field.”

This year Eagan started on everything possible until they played Alva (our 5th game) and he hurt his knee and missed the rest of the Alva game and the game after that. After that he only was on punt and punt return. On their last game Luther only attempted one punt return and Eagan made an open field tackle.

The all over the field standout, Garett started on both offense and defense this year at weak wing and safety/ corner. Eagan started the year as a corner and played 2 games there and as injuries came up he got moved to safety and played 5 games there and then got moved back to corner last game.

Garett had an interception this year and several deflected passes and several tackles. He is a player that excels at weak wing on offense, and 2 of his two best plays are a 86 yard rushing touchdown against the #1 team in our district and a 75 yard receiving touchdown on the first play of our homecoming game.

What makes his so special is that he is a great player full of determination and love for the game and always setting the bar high for himself and pushing himself to do the best he can. Among many of his strengths are that he is coachable and will play whenever he is needed and will give it his all, and his constant stride for greatness.