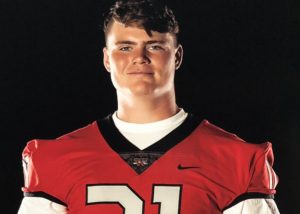 @garrethumann7
Garrett Human is all you could ask for if you were a coach….Hard working, whatever it takes to be the best he can be….That’s Garrett. He gets the job done….What that means at Westmoore High School is he blocks and paves the way for his QB and ball carriers so the Westmoore offense can be effective in all their offensive sets.

He is a special player that has the size, work ethic and passion to be a great player at the next level.

Garret— I think my 2018 season was alright but it could be so much better, I’ve improved on run blocking and physicality over the year.

Garret—most influential person in my football life is my dad, he takes me to camps and supports me and always tells me what I need to work on and my mom always supporting me too, over the summer.

Garret—I went to a few camps like Texas A& M Commerce and OU, OSU, Lindenwood, and was recruited to the Alabama camp by their graduate assistant O-Line coach.

Garret—Over the summer I’ve learned more on my pass set and I’ve done many helpful drills to help me improve my technique. I have interest in big-time colleges where I can play with great competition.

Garret—I am also first chair French Horn at my Highschool and I love music.

Garret—The best game I’ve had so far in my career is my last game VS Jenks when I got it figured out, everything just felt so much slower and I felt quicker at the point of attack as I calmed myself down and played with focus and physicality.

Garret—So far is Squatting 485 but next year I’ll be squatting at least 530.

Garret—Someone who I think would be a college star would be Layne Grantham. Although he’s not getting as much attention as he should be, he’s a great physical player and an amazing leader. Check him out.