A look at one of Tulsa's top senior offensive linemen. 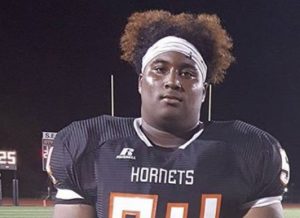 On a team loaded with talent, 2019 offensive lineman Gavin ChalkGavin
Chalk
G | 6'2 | 275
Booker T. Washington | 2019 is making his own mark, paving the way for an explosive offense.

At 6’2, 275-pounds, Chalk is a physical lineman who takes pride in bringing energy to his team. This past summer, he attended camps at Midwestern State and East Central and says both camps helped prepare him for his senior season.

“East Central and Southern Nazarene has really been more consistent by keeping in contact with me over last summer to now,” he says.

Six Star Football recently caught up with Chalk and asked him about his senior season.

Gavin — My dad, he has been in my position before and knows how to handle certain things that I might need help in. He has been around football his whole life so the knowledge that he gives me really he’s me on and off the field

Gavin — Some things that I have improved on mostly is getting my feet quicker, in the past I had a hard time getting up to the second level or pulling inside the hole and that’s really one thing I’ve improved on. Another is communication and having football IQ on the field, there are times in the games where backers might move around before the ball is snapped and it’s the o-lines job is to communicate and do our job

Gavin — 1.pregame meal 2. Me and my teammate Donald will walk around the field three times 3.put my arm sleeve on my left arms, Get taped and put my pants on. 4. Headphones come on and I’m locked in. 5. Put pads on to go out for team stretch 6. Come back in, put eyeblack on. http://7.team prayer head Out in the tunnel 8. Come out the tunnel run to the end of the field and pray9. 10. Look at my mom and dad 11. Game time

Gavin — Is tough I listen to everybody, I would have to say “ttg “ by nba young boy

Gavin — I hit a personal record on bench press of 335

Teammate likely to be a star at the next level