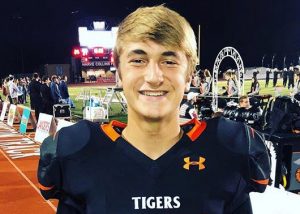 @GradyWade04
One of the best kickers in the Oklahoma City are is Norman High School’s kicker Grady Wade. Wade has played a vital role in helping Norman reach the playoffs for the first time in several years, his kicks under pressure and key field goals have been a big factor this season.

Six Star — How has your season been

Grady—The season has been really good making playoffs for the first time in a while, I feel I have played a great season.

Six Star — What did you improve the most during the offseason

Grady—I feel I have improved my kicking style.

Grady—During the summer I attended OU kicking camp and UCO kicking camp, the experience was amazing at each venue and I took learned to keep on working

Six Star — What schools are showing interest in you

Grady—Before games I usually listen to music and focus on the task at hand.

Grady—Hard to say everyone works there hardest.

Six Star —Teammate to keep an eye on