Norman Junior Tackle Goodson helps Norman to be their Best 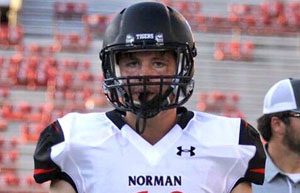 @Big_Grant
Meet one of the more physically impressive OL you will find. Norman junior sensation Grant Goodson. He stands a towering 6’6 and is an offensive tackle whose around 260 pounds. Not only does he take names on the football field but he also plays basketball as well, and could likely see a future in that sport at the next level. He brings a 6-6 frame, a high football IQ and a great work ethic to the game. Goodson also is very aggressive and vocal during games, and also has good footwork and a variety hand combos that he can use throughout the game.

Grant – our season was good I think that at the beginning of the season I was a bit passive and not playing as aggressive as I could, but our season was a break out one for sure. Norman high made it to the playoffs for the first time in forever and we had great junior and senior leader ship that developed during the season I think that I became more aggressive and smarter during the season also I became more of a vocal leader.

Grant – In football wise is my first o-line coach coach Morman. He is the one that got me to play football and installed a dream to play college football.

Grant – for this summer I am going to focus on weight lifting and learning new techniques that can improve my game. I am going to attend local and state college camps to get more of a name for myself.

Grant – I always try and be vocal and get myself and my team as hype as possible. Me and my friend Yemi will do our handshake at the middle of the field and I will get my hands taped on the field. After that I go inside and listen to a boogie with a hoodie mainly with some new songs mixed in there as well.

Grant – right now it is swervin by a boogie BC

Grant – Calculus: because I am good and I enjoy math and I have a decent amount of friends in that class

Grant – my best game would be the playoff game this year vs. Owasso I feel like I played really aggressive and I made a lot of the right blocks and reads. Of the Yukon game was also a good game because I was matched up against a good d-line and I feel like I preformed good against them.

Grant – was gaining as much as during the season