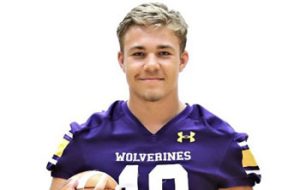 @GunnarGriffith
Vian LB Gunnar Griffith is a player that plays fast and aggressive and will be a key impact player for the Wolverine defense when the 19 season comes. The junior LB and TE is a player that always makes plays and finds a way to always make Vian a better team.

Gunnar – is probably my dad. I went to east central university football camp. The camp was more to see what I can do. I have improved my speed, strength, and knowledge of other teams offenses.

Six star football – What colleges you look/looking at you

Gunnar – I would like to play for Oklahoma university and east central has showed me the most interest.

Gunnar – For my pregame ritual I spend time alone and listen to music that helps me get focused on my game.

Gunnar – Pour some sugar on me

Gunnar – my favorite class is English.

Gunnar – My best game would be against Lincoln Christen this season.

Gunnar – William Lyons is the player to keep an eye on. He is one of the hardest working on my team and him and I can play at the next level.