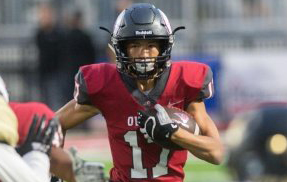 @hakelan
Just a freshman, Hakelan has loads of potential and talent for a very loaded Owasso Rams team. The great athlete looks to be a stellar wide out/Defensive Back for many years to come and get the attention of several big time schools in his next three seasons.

Standing 6-0, 170, Carney has some good height and will be asked to use that to help the Owasso offense make some big plays in the coming years. Despite being very young, Carney already shows signs of being a big player in the near future. Shows nice moves and ability to make people miss along with some good hands. Its also possible he could grow and end up 6-2 or so and get some more looks over the next few seasons.

Hakelan —Our season at first was a little rough without a few players but then we were on a role I feel like I played really good as a freshman on varsity.

Six Star — How do you think you improved during the offseason

Hakelan —I think I have improved on my routes getting away from pressure and off the ball faster. I would say my dad and coaches.

Hakelan —I’ve been to a couple of camps with some people. I went to a Baylor camp a OSU camp.

Six Star — What schools have shown interest in you so far

Hakelan — I haven’t had any because I’m only a freshman.

Hakelan —Eat a few hours before game, go to locker room get dress go to meetings.

Hakelan —In my feelings by drake.

Hakelan —My best game was against Moore because I had 2 touchdowns and one was to make it 38-31 we were down.

Hakelan —Getting my bench up