Catoosa DB/WR Hayden Keeter is Hidden star in the making! 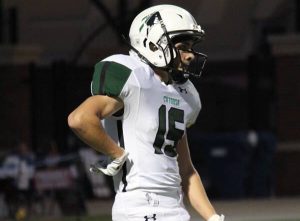 @HKthaGoat
Meet the ultimate team player, the guy that does not need to be the player getting all the glory, but the player that will make the plays and help you get the win. The guy who guy that is a key to the entire process, a guy that makes the system work. With two thousand yard rushers in the backfield you can’t always expect the spotlight to be on the talented wide receiver. Hayden KeeterHayden
Keeter
DB/WR | 5'10 | 155
Catoosa | 2020 is that guy, the talent is all there, the will to win and the drive to make his team better is within him every game.

Not only did Hayden play on offense but he was a defender that was able to make an impact with 2 interceptions, at least 10 pass deflections, and 50+ tackles as a cornerback and on occasion free safety. Simply put Keeter goes 100% at all times and is for sure one of the smartest player on the field, from knowing how to play every coverage to understanding position to recognizing opposing offenses formations Hayden is always aware of what he needs to do to put himself in the best position to do his job and potentially make a big play. That’s what separates Keeter from the pack. His quick decision making also plays a role in who he is as a player.

Six Star — What have you improved upon the most this season

Hayden—This season I feel that I improved significantly on reading offensive formations, man coverage, and definitely aggressiveness and confidence

Six Star — How has you season been this year

Hayden—My season was filled with success and very few errors and mistakes, I feel as though my play was better than expected by anyone and was certainly a lot more good than bad

Hayden—My father has been the most influential person in my football life so far, as he has always been my number one supporter, but at the same time my number one critic who always expects nothing but the best from me.

Hayden—I have not attended any camps, although I plan to attend as many as I can this upcoming year and summer to improve my game as much as possible

Hayden—I have not had college interest yet, as some may consider me undersized (although that doesn’t change my impact on the field) and I am yet to gain much exposure.

Six Star — Most people don’t know this about me, but I:

Hayden—I would have to say Week one of my junior season, as I had one interception in the fourth quarter and did not allow any receptions, while racking up 7 tackles, 2 for a loss