Hayden Priest, MLB from Enid is putting together a strong season. 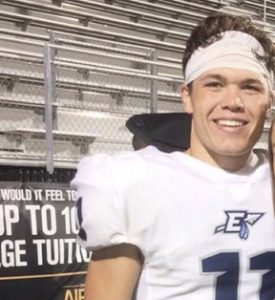 @hayden_priest
One of the most aggressive and physical players you will find is Enid’s Hayden Priest, a player that is always on the hunt for his next tackle. The hard nosed 5-8 Middle Line Backer put on some mass this past summer and saw his hard work pay off the Plainsmen this season. It is this dedication and hard work that has helped Hayden to get some college looks and get on the radar of some schools at the next level, such as Sterling in Kansas.

Hayden — The most influential person is my dad because his taught me everything I need to know.

Six Star— What camps did you attend during the offseason

Hayden — My summer consisted of one camp in Fort Hayes, Kansas that went well.

Six Star— What schools have shown the most interest in you

Hayden — The experiences were fun and learned a lot more. This summer I was able to get bigger and get my numbers higher which has helped me get on a path to have more tackles this year than last year.

Hayden — My pre-game ritual is usually sit down and focus up on what I need to do to be successful.

Hayden — My favorite song to listen to before game is probably bad company by 5 finger death punch. Favorite class is probably office aid!

Hayden — Best game so far this year was against Norman recorded 16 tackles.

Hayden — Biggest weight room wasn’t a lift but packing on about 15 pounds before season.

Six Star— Teammate to keep an eye on

Hayden — I’d keep an eye out for Blake Priest. He’s also a sophomore.