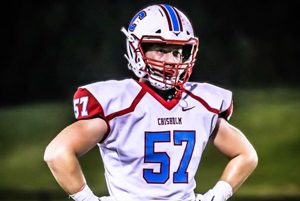 Sometimes you look at football player and know he is a true football play and a LB like Fields is one of those rare talents that makes you say how does #34 show up all over the field. With 121 tackles and one fumble recovery this season its easy to say he was the man in the middle that you were not going to get by. He is a big time downhill LB that offenses really have a hard time blocking, fights off of those well and makes a lot of hustle and extra effort tackles for the Chisholm Defense.

Fields is a tremendously hard worker in the weight room, who puts in extra work after school and on weekends, and practices very hard during the season. Fields went to a camps at Oklahoma Baptist, East Central, Emporia State, UCO, Harding, and the Kansas City Mega Camp at William Jewell College. Among schools looking at Hudson are Oklahoma Baptist, Harding, and Friends University.

Fields shows some very impressing weight room numbers, he deadlifts 420 and squats 405. Fields looks to major in law or business in college and recently got his first offer from Friends University.

Hudson – My most influential person in my life is my dad as he is my position coach and how he has always believed in me and pushed me to be my best in all aspects of life.

Six Star Football – What camps did you attend during the offseason

Hudson – I attended many camps this summer which I sent in an earlier message! But the main lesson I took away from this summer was the value of hard work and how if you have the dream of playing college football you have got to go take it! Which I am working towards! I feel like so far during the off-season I’ve gotten a lot stronger and steadily getting faster and fine tuning my 40.

Six Star Football – What schools are looking at you

Hudson – I have had interest from Oklahoma Baptist Harding University and Friends University. Harding especially as we stay in touch and email often.

Hudson – My pre game ritual is to go away from the locker room and pray with my dad before every game.

Hudson – My favorite class is Botany.

Hudson – My best game was against Alva I had 24 tackles that night.

Six Star Football – Teammate that could be college star