Keller, a player that does whatever it takes to help Broken Arrow win. 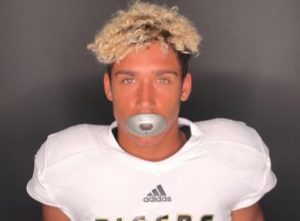 @_IsaiahKeller
Broken Arrow needs players, great players to stay at their level as a top power in Oklahoma…One of those key forces in their weaponry is none other than Isaiah Keller. He can play anywhere on the field and do anything you ask of him, a coaches dream as far as talent and versatility. Skillful athlete who can split out and make plays as a wide receiver, run very good routes and catch anything that is around him. Also a smart defender who is a great punt returner.

Isaiah—My season was great. There is always room for improvement and to perfect my game. What are some of the things that you feel you improved upon during this off season?

Isaiah—My route running was a big improvement to me and being able to create separation from defenders. Who has been the most influential person in your football life so far?

Isaiah—Coach Cochran, he has pushed me all this off season and this season to be my best. Tell us about your summer, camps, combines, visits, etc. Tell us about the experience and what you were able to take away from it, what camps you attended?

Six Star — How was your offseason

Isaiah—Summer was actually really fun, going down to Arkansas winning the 7 on 7 tournament down there and just having fun with my brothers all around.

Isaiah—Temple has showed me the most interest and I hope to travel down there and visit soon. Most people don’t know this about me but I moved to Virginia my 9th grade year and stayed my sophomore year then moved back to Oklahoma right after sophomore year. Favorite Song: The resistance- Drake

Six Star — What has been the best game you have had in your career and why:

Isaiah—First game of sophomore year. I was the only underclass man to start on offense and I had something to prove. So I went and had 5 catches for 80 yards and 95 yard kick off return Td to start the second half.

Isaiah—benched 255 Teammate likely to be a college star:

Six Star — Teammates likely to be stars in college

Isaiah—Jaylen Moss that boy is a straight beast.