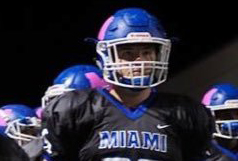 One of the state’s premier young offensive linemen prospects, Miami 2020 Jackson SatterwhiteJackson
Satterwhite
OT | 6'5 | 285
Miami | 2020 is hoping to come back strong from an injury that has kept him sidelined this season.

When healthy, Satterwhite is a physical 6’4, 260-pound tackle who is a strong as both a pass blocker and run blocker and says he takes pride in locking up defenders. He has been rehabbing five days per week for three months as he gets back to health and says he has high hopes for his senior season. During the offseason, Satterwhite attended several camps at Pittsburg State, Missouri Southern, and received invites to attend Offensive Line Camps at Virginia Tech, Nebraska, Oklahoma State and Tulsa offensive line camps before his injury.

Satterwhite says the most influential person in his football career has been his dad.

“My dad has been to the pro level of football so he knows what it takes to get there and he has pushed me through everything and is helping me through this rough time of injury,” Jackson Satterwhite says.

Satterwhite says his biggest accomplishment in the weight room is when he hit 225 pounds on power clean last year. Outside of football, Satterwhite says he enjoys the outdoors and hunting and fishing.

His biggest last year against Vinita, but says, “I was a sophomore last year and I could have definitely done better if I wouldn’t have gotten hurt.”