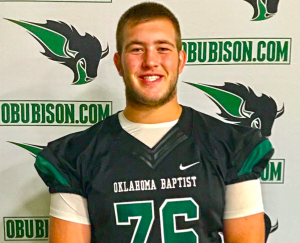 Blessed with an athletic frame at 6’4, 260-pounds, Chesley is physical, yet agile for an offensive lineman and has worked hard in the weight room to develop his fame. He gets good leverage on runs and has good technique in his pass sets.

He attended camps this offseason at OSU, Baylor, Tulsa, Memphis, Central Arkansas and Oklahoma Baptist as was recognized as a top OL in almost every camp he attended.

“It was a great experience learning from different college coaches and bringing back some of those techniques to my teammates,” Chesley said.

He recently drew an offer from Oklahoma Baptist and has been in contact with Northwestern (Big 10), Tulsa, OSU, Baylor and Dartmouth.

Six Star Football recently caught up with Chesley and asked him about his junior season.

Jacob — We have several young guys and it took a couple of games to really gel. On a 5 game win streak and looking at winning district. I improved physically and dominate my opponents more. I’ve become a better leader.

Jacob — I definitely improved in size and strength and feel like I have a better knowledge and understanding of the game. – –

Jacob — My parents are always there for me and encourage me to reach my goals.

Jacob — I am always the first to get taped and I dance to Jump Around by House of Pain on the sidelines right before kickoff. –

Jacob — I listen to everything, but I recently found a song called “Fire” by Barns Courtney that I really like. – –

Jacob — A really good game from last year when we beat Kingfisher for the district title, but my best game was this year against Pauls Valley when I had 6 pancake blocks and dominated the D line. – –

Jacob — Putting on 20 lbs of muscle during the off season and breaking my PR’s.