Mullen looks to continue dominance at LB/RB in senior campaign. 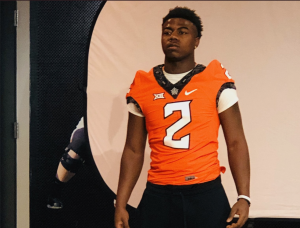 @jaden_mullin
Jaden Mullin is among the elite athletes in the state and lucky for the Millwood Falcons Mullin will bring his big time skill from the John Marshall Bears to Millwood in hopes of leading the Falcons to a Class 2A State title in 2019. He is one of those players that has the ability to be a game changer on both sides of the football as a LB and as a RB. Big things are in store for Mullin’s senior season at Millwood.

Six star football – How was your season, how do you feel you played

Jaden – I feel I played pretty good. I was only allowed to play up to half-time and some of the games due to early blowouts.

Jaden – my parents are the most influential people to me. they support me and make sure I get what I need to get better and advise me with any questions I may have.

Jaden – I plan to attend as many camps as I can. I have been invited to the Nike opening for the second time this year. I hope to show much improvement, last year I was suffering from a hamstring injury but didn’t want to pass up the chance to go.

Six star football – What colleges are showing interest in you

Jaden – I have met with several coaches so far… Iowa State, Texas tech, Arkansas State, Missouri State, and Oklahoma State. Not sure of the interest level but all were aware of who I was.

Six star football – most people don’t know me but I’m:

Jaden – my game time ritual is I sit alone with headphones and focus on the game plan.

Jaden – is cross me by NBA youngboy

Jaden – feel my best game was against Beggs in the state finals. I played with an injury no one knew about to help my team win.