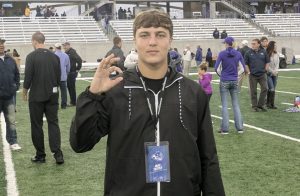 A physical, intense, tough runner with great vision and good hands, Collinsville 2019 Jake TuttleJake
Tuttle
RB/OLB | 5'10 | 205
Collinsville | 2019 is earning a reputation as one of the Tulsa area’s premier players.

At 5’10, 205-pounds, Tuttle has helped Collinsville to an undefeated start to the season and has rushed for 939 yards on 104 carries and 12 TDs through his team’s first seven games.

“We are having a great season and am working hard to keep it going,” Tuttle said.

Six Star Football recently caught up with Tuttle and asked him about his senior year.

Jake — This off-season I worked really hard in the weight room and gained some weight. I feel like I’m also faster and worked on my footwork and hands a lot.

Jake — My parents are always very supportive and have helped me a lot. Also my high school coaches and trainers that I go to have poured a lot of knowledge and time into me to help me develop into the player I am today.

Jake — I had a very busy summer between camps and visits. Like I said, my parents are very supportive and are willing to take me all over the country. I went to a lot of camps to schools in the Northeast that are recruiting me along with a bunch of schools in Texas. Having the opportunity to go against guys all over the country made me a better player.

Six Star — Most people don’t know this about me but

Jake — I Have lived in 4 different states

Jake — Say a prayer, talk to my linemen and other RBs, and listen to music

Jake — This year playing Tahlequah was a great game. We were both 5-0 and a lot of people thought we were overrated and going to lose the game. Going into their place and beating them 43-8 on their homecoming was a great feeling.

Grayson
Boomer
TE/DE | 6'6 | 230
Collinsville | 2019. He has been troubled by injury in HS, but has a ton of potential and has the right mindset to succeed in college. He’s going to tear it up at OK State

Jake — Seth Weiser, he has a crazy motor and pushes me along with all the other guys in the weight room. He expects the best out of himself and all his teammates

Cole DuggerCole
Dugger
QB | 6'1 | 180
Owasso | 2020, we have been a primarily run dominant team this year but the guy can make all the right throws. Has a super strong arm and is very accurate as well.