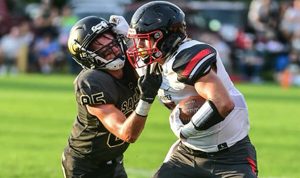 A do it all kind of disrupter on defense, meet Jalen Allen a senior who had 3 interceptions and 2 fumble recovery’s and 1 was for a 45 yard touchdown. Allen averaged 12.3 tackles a game and was awarded with All District honors.

Fast physical and playing with a ticked off attitude, Jalen gets the job done.

Six Star Football – How was your season

Jalen – My coach David Blevins is the most influential person always pushing me to be better as a player and a person. This summer I attended the pro football hall of fame academy and that helped my game more than anything I did this summer. I practiced against the best players in the country and was coached by rod Woodson.

Six Star Football – Most people don’t know that I:

Jalen – My favorite song is freestyle by lil baby

Jalen – My favorite class is history

Six Star Football-Teammate that could be a college star