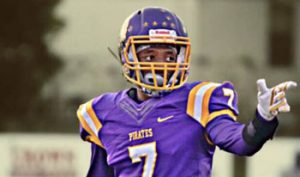 @JalenFullbright
Meet one of the fastest and most talented players in the Tulsa metro area, the Bristow Pirates Jalen Fullbright is a player that is quite special to say the least. Fullbright is considered to be very explosive with some lightning speed at his WR/slot position for Bristow. Also is athletic enough to go up and get balls in traffic.

Six Star Football – Tell us about the experience and what you were able to take away from it, what camps you attended?

Six Star Football – What are some of the things that you feel you improved upon during this off season?

Jalen – My feet work and blocking

Six Star Football – What kind of college interest have you had so far, and what schools are showing you the most interest?

Jalen – A couple d2 schools no d1s yet

Jalen – Oolagah game when I had int, 1td, and randy mossing a kid

Six Star Football – Players to Keep an Eye on