VALLEY CENTER'S HODDY A PLAY MAKER IN THE '21 CLASS 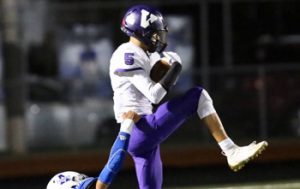 Style of play
Jalen – as a corner, I love to be aggressive and get involved with as many plays as I can. I’ve always been competitive and loved to do the best I can for myself and my team. I like to be physical and have some swagger on the field too.
2019 stats
Jalen – in 8 games played i had around 40 tackles, 1 INT, 1 FF, 3 KOR for 40 yards.
Most influential person
Jalen – is definitely my father, no matter what struggles we go through he has always prevailed and been a great father. he also encourages me so much for football.
Most influential coach
Jalen – Blake Pearson is my favorite coach, he is like a second father. he always cares about me and wants to see me do my best in football, he will even do football work with me during track season.
Athletic family member
Jalen – My father was an all-state safety when he played and solid WR
offseason goals
Jalen – I want to get my 40 time to around 4.5 maybe faster, as well as increase my vertical to 30+. I also would like to put on more weight and height so I can be even more physical.
Most memorable game
Jalen – Goddard was my best game this year, I had about 10 tackles, and my forced fumble on the 5 yard line to switch the flow of the game and give us the ball.
Pre Game
Jalen – I like to just focus pre-game and think about making big plays, I also like to get hype with my team so we can get ready to play.

my favorite song
Jalen – right now is Money Talk – Rich the Kid and NBA YoungBoy.
Favorite class
Jalen – I’ve always been really good at English.
My favorite NFL player currently
Jalen – would be Jalen Ramsey, I love his swag on the field and how physical he is.
Favorite NFL player as a kid
Jalen – would’ve been Randy Moss, I loved watching him play.
biggest weight room accomplishment
Jalen – would’ve been finally benching 135 freshman year.
Teammate could be college star
Jalen – Marion Ponds, he is a junior running back and has serious talent. He has got the K-State team interested in him.
Hardest working teammate
Jalen – Hunter Sharp is one of the most hard working kids I know.
Teammate to keep an eye on
Jalen – Marion Ponds is definitely someone to keep an eye on

★KANSAS QB’S MAKING THE GRADE YOU NEED TO KNOW

★KANSAS CITY DEFENDERS ON THE MAKE

★WICHITA PLAYERS ON A MISSION FOR 2020

★WICHITA MAKING THE RADAR IN 23