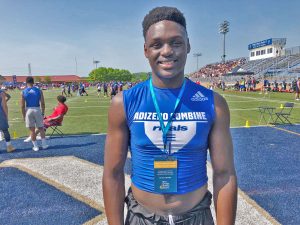 At 6’5, 227-pounds, Redding has terrific athleticism and length packed into his frame and as a weak-side defensive end, his speciality is to pass rush, getting to the quarterback, and keeping the outside contained.

“I use my speed and quickness to get into the backfield to get to the ball carrier or to get to the quarterback,” he says. “I use my body length, arm length,  and my power to create separation between me and the O-lineman to fulfil my responsibilities.”

Redding was able to get some valuable varsity time as a sophomore last season and was among the Bruins’ most important players for a team that went 9-2 overall.

“Last year, starting varsity  was huge for me,” Redding says. “I impacted the game by making big plays such as having tackles for loss, getting sacks, forcing fumbles,  and sacking the quarterback.  Looking back on the year, I could say I  was a team player but there are still areas that I can work on and improve for the upcoming season by continuing to work on my speed and strength.”

Redding has spent the offseason working on his speed, strength, defensive techniques and being more disciplined and focused.

He opened the offseason by attending  Rivals Three Stripes camps in Nashville, Tenn., and has also attended the Lindenwood Mega Camp in early June where he earned his first two offers from Mizzou and Eastern Illinois.

He has since accepted invites from Mizzou, Ohio State and Notre Dame camps.

“At those following camps I learned different techniques and skills on the college level that I could bring back to Rock Bridge,” he says. “All the camps that I attended have been great and amazing experiences.”

“I am blessed in receiving my offers and I am very happy to know that my work is paying off,” he says.