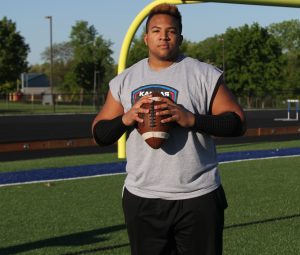 At 6’1, 285-pounds, Gore burst on the scene a year ago as a freshman and made an immediate impact on the field. This year, Gore figures to be a force on the defensive line and an anchor for a Staley team with high expectations.

“I bring an anchor for my defense and someone the coaches don’t have to worry about doing my job,” Gore said. “I make offensive coordinators change their game plan and make my job a whole lot easier for my team.”

Gore said most important game he played in last season was in the state semifinals against Vianney.

“I made sure I didn’t let them run up the middle and I tried to get up into the quarterback more and get the pass rush going,” Gore said.

“I am working on getting quicker and recognizing the pass more and watch more film and make sure I am studying the person I am going against,” Gore said.

Gore said he began playing football in fourth grade and has since come a long ways.

“When I was younger coaches had to yell at me for going and chasing butterflies,” he said. “As soon as they got my attention I was in the zone and making it happen.”

Gore says the most influential person in his football career has been his dad.

“We watch film together and he makes sure I am always on my game,” Gore said.

A fan of Ndamukong Suh and Aaron Donald, Gore says he takes elements from both players’ game and tries to make them his own.

“I want to have the strength of Suh and get off the ball like Donald,” Gore said.

Although he doesn’t currently hold any offers, Gore has heard from a host of Power 5 FBS programs already.