Union's Sanders is focused on getting the job done for one of OKLA's best! 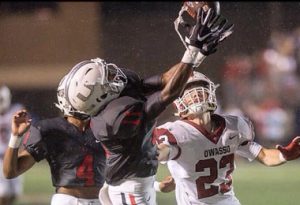 @JaQuanSanders12
Under the helmet sits a man on a mission for perennial Tulsa powerhouse Union High School. What you ask sits Ja’Quan Sanders apart from you average football player…Its simple yet not easy, it’s a pure focus and a mind set that means never giving up on yourself, your teammates or the play in front of you. Meet Ja’Quan Sanders.

Ja’Quan—This season has been good overall for my first starting, I highly believe that I still do have a lot to work on, but this season has thought me a lot so far, and I can’t wait for my senior year.

Ja’Quan—My father. Everybody would say you can’t play football, because you have asthma… My father was afraid for me to play football, but he took that chance in kindergarten, and I’ve been in love with the game ever since.

Ja’Quan—I haven’t been to really any camps, the only camp I’ve been to is TU camp, and I feel I’ve done pretty good at that event for 3 days.

Ja’Quan—am in love with the game of football, it is my hobby, and passion.

Six Star — Teammate who is likely to be a college athlete:

Ja’Quan—I wanna say me, because I really do go out there every day and try my best, even though I make a lot of mistakes, I always try to have a short memory, and move on and focus on the next play, but then again, the whole team is very hard workers, we’ve work so hard this whole year against adversity.

Six Star — Players to keep an eye on are: