Seminole's Jared Stewart Among top rush ends in class 3A-3 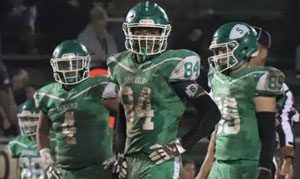 @jareds_84
Meet of the up and coming prospects of Class 3A-3, Seminole tough nosed and athletic presence Jared Stewart, a player making a name for himself as a DE and a player teams will have to watch out for in 2019. Stewart was one of the best players on the defensive front in 3A-3 and posted 17 sacks and 89 tackles, quite impressive numbers.

Despite not having received offers yet, we feel that Stewart has a lot of the tools college teams are looking for off the defense edge and Stewart will look to make the most of what looks the be a great 2019 season. Stewart plays the game rather simple, he comes off of the ball as hard as he can and makes sure he is playing faster, hungrier, and more aggressive than the opponent(s) lined up in front of him. Stewart proved just that with 1 sack and multiple tackles against district power Lincoln Christian, showing just how dominant he can be. Stewart also proved too much to handle to Tecumseh with 3.5 sacks.

Six star football – what camps have you attended

Jared- I haven’t attended any camps as of right now, but me and my dad have already began looking at camps for me to go to all throughout the summertime and I can’t wait.

Jared – I believe I had a lot of outstanding games this season but if I had to choose my best games this year it would probably go to Tecumseh where I had 3.5 sacks or Lincoln Christian, my stats weren’t eye-popping, with 1 sack and 4-6 tackles, but my impact on the game was definitely seen with the eye test. Any time they ran the ball my way it would get bounced outside or there would be a tackle for a loss, and Lincoln Christian’s 6’5” RT didn’t make that task the easiest haha.