Oologah 2019 defensive back is putting together a big senior season 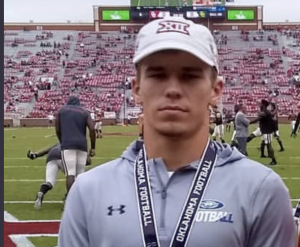 @jaTay05
An intense competitor, Oologah 2019 defensive back Jared TaylorJared
Taylor
DB | 6'0 | 190
Oologah | 2019 is putting together a big senior season and has helped lead the Mustangs to a strong second half of the 2018 season.

At 6’0, 190-pounds, Taylor plays with a big motor, and flies to the ball regardless of where the action is happening on the field.

Despite a slow start that saw Oologah drop its first three games out of the gate, the Mustangs have now won three of its last four games and are 3-1 in district play, including a win over No. 1 ranked Wagoner during that stretch.

“I feel like I’ve had a stellar year so far and so has my team,” Taylor said.

“These camps were fun and gave me a great opportunity to showcase my ability,” he says. “What I have improved on the offseason is my footwork and quickness.”

Taylor says the schools that are currently showing him the most interest are I like Emporia State, Pittsburg State and Northeastern State.

Six Star — Who has been the most influential person in your football life so far?
Jared — My parents, they have helped me every step of the way.

Six Star — Pregame Ritual
Jared — My pregame ritual is i pray before the game then I write some stuff that means a lot to me on my wrists.

Six Star — Best Game
Jared — Week 7 against Wagoner. I had a good game and we beat the #1 team in the state.

Six Star — Hardest working player
Jared — All of my teammates work hard but I like to think that I try not to be out worked. It is one of my traits.

Players to keep an eye on
Jared — There is a couple players on my team that you should keep an eye on and that is Braden Vanderpool and Ty Dixon. Both great athletes and will do anything for their team to succeed.