John Marshall's Jarod Leviston has off the chart potential, play maker in OKC. 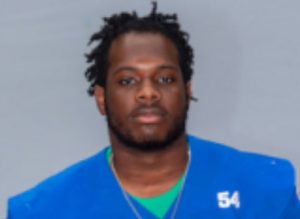 The is an unlimited amount of athletic talent on the football field at John Marshall High School in OKC. One of those among the many is a super athletic player named Jarod Leviston. Russell Wilson…..Yes Jarrod resembles skills of the great one, when you watch him you will notice how he has a knack for keeping plays alive even though its dead…Its not Jarod has a plan and it often times leads to great things. Not only are his feet fast and agile but his arm is very strong as well. He can beat you in multiple ways.

Jarod—I feel like I accomplished many goals. Threw over 2,500 yrds and had over 35+ tds..I made a big step compared with to last year.

Jarod—My brother Lenard has always challenged me to be great. If it was just having a race tying my shoes or if we’re on the track and I’m trying to prove how fast I am. Now since he’s in the Air Force Academy he wants me to work even harder than before to match him.

Jarod—I went to the Memphis, Louisiana, and Mississippi football camps. I believe that I can complete at the next level. It was nonstop reps, either your tired or throwing up. It’s nothing harder than what I make it. All it takes is for me to work harder and harder after each practice. Stay in the film room as long as I can.

Jarod—Saying the Lord’s Prayer with my receivers

Six Star —Teammate most likely to be a college athlete

Six Star —Hardest worker on the teammate besides myself is:

Jarod—Kevon curry (VonCurry_). He stays in the weight room trying to better his self everyday. When we have a practice he also has another practice after or before it.

Six Star —Teammate to keep an eye on:

Bryce
Stephens
WR | 6'2 | 166
John Marshall | 2021 (Brycestephigh). They’re the most entertaining and elusive WR’s I had an honor to play with. They’re just going to get better and better next year.