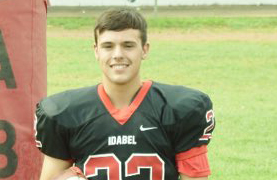 @jbushers22
Meet one of the Oklahoma’s top kickers in Idabel’s Jarrett Bushers, one of the top kickers in the state, has been to several Kohl’s camps including the national camp, the Lincoln Riley OU camp, Southeastern Oklahoma State Showcase.

Jarrett is a kicker that has a great work ethic and he has clearly put in a lot of time and hard work. Bushers was #4 in 3a on kickoffs a few weeks ago but have not had the opportunity’s this season as that he did last. Jarrett is also an avid powerlifter. Schools interested are SE Okla. State, & Southern Illinois. Without question Bushers is confident, aggressive, and passionate for the game.

Jarrett- This season was a huge change with a new coach coming in who did not use me in games the way he should have. I feel I’ve played good given only having a few opportunities.

How was your summer and what camps did you attend

Jarrett- My summer was full of training and preparation for the 2018 season. I attended a Southeastern Oklahoma state showcase, the university of Oklahoma showcase, a Kohl’s camp and the Kohl’s national scholarship camp in Wisconsin.

Jarrett – My pregame ritual is listening to music.

Teammate to play in college would be

Keep an eye on: