Kickapoo senior is one of SWMOs top DL talents. 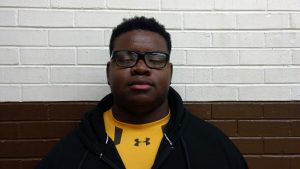 At 5’11, 315-pounds, Sims is a strong physical player with a low center of gravity who is at his best when he clogs holes and stops the run. He’s looks forward to contact and tries to hit hard.

This offseason, Sims has been focused on getting stronger, quicker and improving his technique.

“Those three things are important for guys in my position,” he says. “I’ve been putting in the time. I have to keep my motor going. Coach is encouraging me to keep getting better.”

Sims says he enjoys watching Aaron Donald and Ndamukong Suh and sees a little of himself in both players.

“I play big and have a good motor,” he said. “Aaron Donald is a guy that I like who has the technique and size that works really well in the NFL. And then Ndamukong Suh with his motor. I like the way they both play. My game would be a mix of them.”

A a youngster Sims liked basketball more than football but was recruited by his brother and others to give football a try. He says he began playing Breaker Football in 2007 in Louisiana.

“They kind of recruited me to play, and I’ve been sticking with it ever since,” he said. “I like the pace and what’s expected from the players.”

Sims says the Kickapoo coaching staff has had the biggest impact on his football career to date.

“I think the coaches have been the most (important) at helping me get better,” he said. “I think that if they want to take their time out to help our team out, then I feel like I should give them my all at all times.”