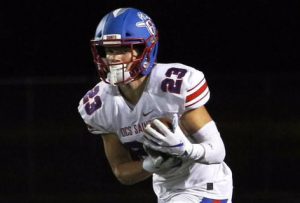 @jaxon_canard41
One of the hardest working players you will find is Oklahoma Christian School junior Mr. Do it all Jaxon Canard. A great work ethic and a player that has a very high football IQ, Jaxon is a counted on two way playmaker for the Saints offensive and defensive units.

“I absolutely love the game, so when you love something I think you’re automatically going to put more effort into it. Last season I played pretty much only defense because there was a senior running back Mason Arnold ahead of me and I really got to learn a lot about the safety position.” Said Canard.

Jaxon – I can absolutely credit almost all of my success last year to coach Brooks Stephenson, he was the db’s coach and we have a close relationship where I got to soak up everything he taught me. He is also my rb’s coach and he teaches me so much. This season I haven’t played as much defense because the coaches felt like the offense was the strength of our team and wanted to rest me on defense.

Six Star Footabll-Both sides of the ball, Canard is a difference maker

Jaxon – I enjoy playing both sides but I wish I could’ve played more on defense because I think I like it more but I also feel like I would be better suited for defense at the next level.

Six Star football – What schools are looking at you

Jaxon – I have kind of started late on the whole recruiting thing but I started that whole process last summer and really the only school that has showed some good interest in me so far is OBU, no offers.

Six Star football—How was your season