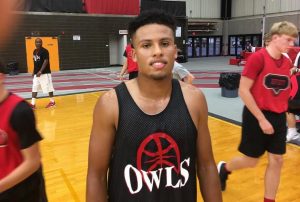 Jaylen
Varner
WR | 6'2 | 180
Marshall | 2019 enters the 2018 season as one of the state’s premier wide receivers, tucked away at a mid-Missouri school that doesn’t often get a lot of publicity for its high school football program.

But don’t let that fool you. Varner brings good size at 6’2, 185-pounds and combines those physical attributes with speed, quickness and the ability to break down defenses with his route running.

He can play a physical game and loves to compete and attack the ball.

“I play with a little bit of that ‘dawg’ mentality,” Varner says.

A year ago, a young Marshall team struggled through an 0-10 season, but Varner says he hopes the experience has helped prepare him and his teammates for this season and beyond.

“Looking back on last season I feel like I made some good plays, but looking back on film I see that I could’ve done things better to set myself up for success, Varner said. “You can always find things to improve on. My experience of last year will help me this year because I know what to expect from a wide receiver standpoint.”

Varner says he spend the offseason trying to work on a little bit of everything, but his biggest focus has been technique.

“From a good release to getting in and out of breaks to create separation from the DB,” he says.

Not to mention Mizzou team basketball camp and other basketball events in June.

“From all those football camps I got to take away different drills and tips from Division 1 coaches or former NFL players,” Varner says.