Ardmore's Scallion, a player willing to win at any cost! 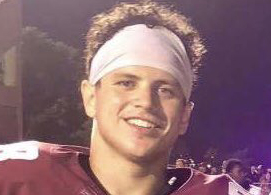 @JermaineJr28
Success comes to teams that have a leader and a player that truly cares about winning…Meet Jermaine Scallion of Ardmore. Scallion is a player that is one of a kind and a very special one that does not come along very often. He is a big time field general.

He likes to know what all his teammates are doing and knowing what all the offense can throw at us so he can put himself and his teammates in the best position to win.

Six Star — How has your season been

Jermaine—I’ve really enjoyed this season. I still have things to work on but team success is more important to me than personal success, and we are 10-0 so I’m doing just fine.

Jermaine—I’ve improved my health and mental preparation this offseason. I’ve studied more formations and plays and have just put everything I have into my senior year.

Jermaine—Honestly, Coach Newby has really helped me change my perspective on football. There was a point in time where I wasn’t feeling the love anymore but he showed me how to love the game again. He makes everyday a day that I get better as a football player and a young man. No matter where I go to for the next level I hope to stay close with him.

Jermaine—I’ve had teams email me and talk to me, but I don’t have any offers yet. I plan to start receiving them after the season and I’m not going to think about recruitment until our season ends.

Jermaine—Have played 5 different positions on offense, 4 positions on defense, and have been on every special teams unit throughout my high school career.

Jermaine—Is my teams “lock in” time. About 5 minutes before the game we turn out all the lights and everyone is quiet and thinking about what we are going to do in the game.

Jermaine—For football are pretty much any Lil Baby song.

Jermaine—The Paul’s Valley game my junior year. I had the best rushing game in my career plus a lot of tackles and a pick. Sadly, I fractured my ankle about the second quarter. I finished the game and we won, but this was my last game of my junior year. I always had my favorite moment in my career so far in this game.

Jermaine—would have to be dead lifting 405 pounds as a freshman. I haven’t deadlifted in a while but I was proud with that.

Six Star — Teammates that should have big college careers

Jermaine—I have a lot of great teammates so I can’t really single out one player. I think will have a great college career. But if I had to say I believe Tero Roberts, Eean Ross, and Sitani Lemeki are destined for great things at the next level, and I wouldn’t be surprised if any of them made it big.