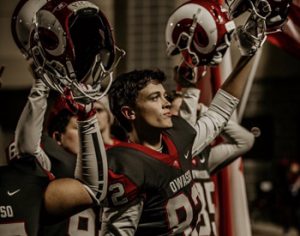 Jett Williams, Owasso, 6-3, 180, WR, 2021
@JettWilliams20
Style of play
Jett – I would describe myself as very smart and great route running.
My most influential person
Jett – is Kelan Carney
My most influential coach
Jett- is coach Simmons
A great athlete in my family
Jett – was my grandpa who was a hall of fame wrestler for Oklahoma state and wrestled in the Olympic trials.
offseason goals
Jett – My goals this offseason is to be 215 pounds and be 6’4. Doctors say I have a ton of growing left so I have potential to be 6’6. I also want to work on being a better leader for the receivers and the team.
Most memorable game
Jett – was the state championship because when there were no more time on the clock I thanked God for blessing me with my brothers and how he brought this team so close to form this brother hood that’s un separable.
My pregame ritual
Jett – is to bow my head and pray to God and thank him for everything. I owe everything to God so I think him for keeping us safe, keeping us close, and making sure we don’t forget any of the plays. After that I let him take over.
Favorite song
Jett – is country boy can survive by Hank Williams
Favorite class
Jett – is leadership because it helps me build on my own leader ship.
My favorite NFL player right now
Jett – is TY Hilton because personally he has the best foot work and has the best hands in the league.
Favorite player growing up
Jett- was Larry Fitzgerald because he is so humble and thinks God for everything he does.
My biggest weight room accomplishment
Jett – was when I got a PR on bench and squat and all my brothers there to support me.
A teammate that’s going to take it to the next level
Jett – is Kelan Carney. He has killer route running, the best hands in Oklahoma, and knows every play inside and out.
Hardest working teammate
Jett- is Kelan Carney. He always trying to do more and more for the team.
The player to keep an eye on
Jett- is me and Kelan. This is our year and we’re going to be known.