Physically talented Ruff, big time player on both sides of the ball for Edmond Memorial. 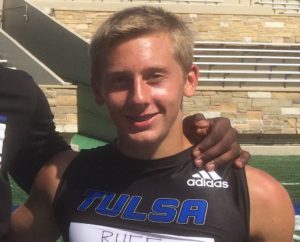 @jj_ruff
One of the most physical cornerbacks you will see in action in Oklahoma is Edmond Memorial star JJ Ruff. JJ is a really physical specimen and enjoys being in the run game, and is an athlete that never gets burned deep. Also a talented wide receiver, Ruff is a strong, sure handed third down slot receiver who takes pride in precise route running.

JJ — Our season has been a little disappointing this far, with us being 2-6 right now, but each game our team grows closer together and we improve exponentially with most of our starters being juniors. I feel I’ve played really solid this season, but I haven’t really made many big, standout plays yet.

JJ —This offseason my route running and my catching ability both improved tons.

JJ —My dad has probably been the most influential person in my football career this far.

Six Star — What camps did you attend this offseason
JJ —I attended the All-American combine in January this past year, and went to a handful of college camps in Oklahoma, such as Tulsa, East Central, and Central Oklahoma.

Six Star — What did you take away from camps this offseason and what schools have shown the most interest in you
JJ —What I took from the camps was different techniques I could utilize in my game, and what I learned from the visits is that there are a wide range of high quality schools to go to. I haven’t generated a ton of college interest, but I’ve been getting looked at by some of the Ivy schools like Columbia and Penn. I’ve also been in touch with the Taylor and Depauw coaching staffs as well. I also got to visit a few colleges while I was in Indiana this summer, which were Taylor and DePauw.

Six Star — Pre Game Ritual
JJ —Pre game I typically don’t listen to music, I just focus on my game and how I can help my team win.

Six Star — Favorite Song
JJ —If I had to pick my favorite song to get hype right now though, I’d probably choose Sicko Mode.

JJ —My favorite class in school is probably my math class, AP statistics.

JJ —My best game of my career was probably the Moore game my sophomore year, because I had a receiving touchdown a handful of catches, and some nice carries too.

JJ — By far and away my biggest weight room accomplishment is my 253 pound power clean.

JJ —Charlie SuenramCharlie
Suenram
DT/DE | 6'3 | 280
Edmond Memorial | 2019 is probably a teammate of mine that is most likely to be a star. He’s an absolute monster.

JJ —Player to keep an eye on would probably be Nate Williams, our running back in the class of 2020.