Hillsboro WR making a name for himself this summer on the camp circuit. 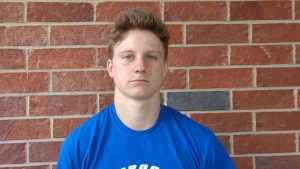 Hillsboro 2018 Joe Gregory is a 5’10, 175-pound wide receiver who has made a name for himself this summer on the camp circuit.

An aggressive player, Gregory plays a physical brand of football whether he is on offense, defense or special teams.

“I feel like I offer a variety of different things I am fast enough to outrun a safety or a corner and I’m strong enough to run through tackles,” Gregory said. “I can go play safety or I can play backer I can play anything of offense so I feel like I’m a all around player, I’m happy that I get a chance to play.”

Gregory says Hillsboro’s most important game a year ago was the Hawks’ first-round district game in which the team’s starting running back went down to injury. He stepped in and had three touchdowns in the first half and added three two-point attempts.

Gregory says he is working on improving his speed and footwork this summer and is also hoping to improve his mental strength as well.

He began playing football when he was in the seventh grade for its Little League football team, the Blackhawks.

He says the most influential person in his football career to date has been his head coach at Hillsboro Lee Freeman.

“Even when I made him mad he never gave up on me which made me a better person,” Gregory said.

Gregory hasn’t drawn any interest from college programs yet, but hopes that will change with a big offseason.

“I don’t think I have drawn any interest from any college because of my size I am only 5’10 175 pounds,” Gregory said. “I’m not that good looking compared to a 6’5 190lbs receiver, I had a good junior year but it could have been way better and I am going to a lot of football camps this off-season to get some more coaches interested.”