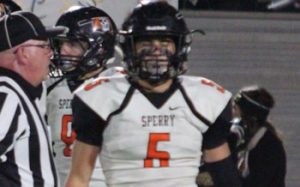 @JoeWhiteley3
Meet one of the most talented and important players you will find in Sperry Junior Pirate Joe Whiteley, a slot back/RB/OLB who can play anywhere for one of the best teams in the state.

Joe – is probably my grandpa who fought in Korean War and played 3 sports and my dad who played at Sperry also.

Joe – I’ve worked out twice a day for almost a year and half now (we won state). I went to a couple small D2 camps, TU camp and OSU camp. Learned if you want to play D1 you can’t take a day off.

Joe – turn on piano music to calm my nerves and then right before we go out I always play freestyle by lil baby and every season by roddie rich.

Six star football – teammate to keep an eye on

Joe – Keep an out for Kohlby Foster as well he’s my bro had two picks in the state final game.