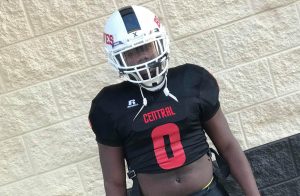 @Joelleehamilto5
One of the most exciting and physically impressive running back in the Tulsa area is a young sophomore talent named Joel Hamilton from Central High School. Joel is a very good runner his has good ability running and blocking and he understands his roles and does his job well.

He plays very smart football, make good decisions and is a player that has all the athletic tools that college coaches look for in a great running back. The future is certainly bright for Hamilton and many of his talented teammates like Punchie Wilson and KT Owens.

Six Star — What Describe your season and, how do you feel you played overall for 2018?

Joel—I have had a good sophomore season and just didn’t end on how I wanted it to, I felt like I played good overall in 2018 a couple of injury and mistakes but I gotta live with it.

Joel—I only attended one camp this summer but I did pretty good for my first time , it Was UCO

Six Star — Players to keep an eye on are: