A Top corner back in the state, Mackey is a Smooth player with a huge upside. 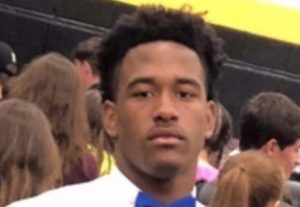 @MackeyJoel
Going by J Smoove on twitter, Mr. Mackey’s style of play is just that….very smooth, precise and accurate, each step, each move calculated. Its this skillset that helps him to be such a good cover corner, is a player that you don’t want to face if you are a wide receiver. Mackey is a shut down type corner. He is one of those special talents that does not come around very often and Charles Page High School reaps the benefits for his great play. The quick footed CB can tackle and has excellent coverage ability.

Joel —I feel my senior season was a big year for me as a player but it wasn’t as big of a year for our team’s overall success.

Joel —The most influential person in my football life is definitely my mother Sharla Mackey. I was blessed with a mom that actually knows about sports.

Joel —I attended 4 camps this summer, Texas State, Tulsa, Oklahoma State, and North Texas. All those camps helped me improve little things in my technique that I didn’t know before as a CB.

Joel —Something that most people don’t know about me is I used to do gymnastics when I was a little kid.

Joel —Only pregame ritual I have is I pray before every game & ask God to protect me & my teammates.

Joel —My favorite song is Kevin’s Heart by J.Cole.

Joel —My favorite class is psychology, which is what I plan to major in college.

Joel —My teammate who is likely to be a college athlete is Linebacker , Hayden Kramer, who has over 400 career tackles.

Joel —Hardest working player on the team is Senior Center Cameron Lierly. He is a beast.