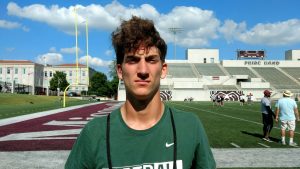 KANSAS CITY — Staley quarterback John Raybourn 6’2, 178-pounds is coming off a standout junior season in which he led the Falcons to a 10-3 record under head coach Phil Lite.

He completed nearly 60 percent of his passes for 1,405 yards in 10 games and had a terrific touchdown-to-interception ration with 15 TDs and just four interceptions.

“As the quarterback it is my responsibility to control the tempo of the offense,” Raybourn said. “It is my job to not only be a playmaker, but to get the ball to the playmakers.

“I try to bring leadership and experience.”

A year ago, Raybourn said his biggest game of the season came against eventual Class 5 state champion Vianney. Raybourn threw for 284 yards and a touchdown, but the Falcons fell in a hard-fought 34-31 contest.

“I played well but we ended up losing,” Raybourn said.”It was a hard fought game that came down to the very last play.”

He began playing football when he was just 6-years old for the Necco Raiders.

“I learned how to play football the right way and won a lot of championships doing so,” he said.

Raybourn says his dad has been the most influential person in his football career.

“He understands the game and is always in my head coaching me up,” Raybourn said.

A fan of the Patriots’ Tom Brady, Raybourn says he appreciates the NFL quarterbacks’ ability to win games.

“The numbers don’t always have to be pretty, but as long as the team comes out with a W, you did your job,” Raybourn said.

At last report, Raybourn did not hold any offers, but has drawn interest from several Division II schools, but Raybourn is also a baseball standout and already holds offers from Division I programs.