Mustang's Sylvester a player with speed and intelligence in Broncos Secondary 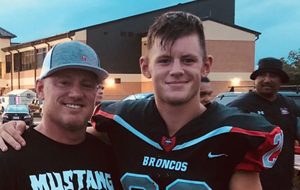 @SlyJojo615
Meet Joseph Sylvester, top notch safety that played 7 games and had 57 tackles for Mustang on the 2018 season. Shows a high football IQ and is a very smart player that has good speed and fast feet, aggressive and coachable. Look for him to be a major defensive contributor and a team leader entering his senior season for the Broncos.

Joseph – My dads been one of the most influential people in my life.

Six Star Football – What did you improve during the offseason

Joseph – The off-season I improved my strength and speed. I’ve had no colleges contact me or show interest in me.

Joseph – is Stronger by Kanye.

Joseph – was against Westmoore.

Six Star Football -Teammate to keep an eye on

Joseph- and that could be a star on next level is Judson Roland.