Eureka youngster is the latest prospect to draw an offer. 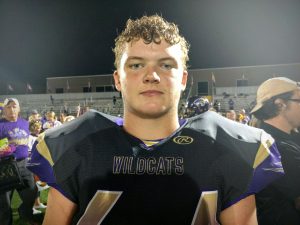 Josh
Baker
OL | 6'3 | 280
Eureka | 2020 became the latest St. Louis area prospect to draw an offer from an NCAA Division I program on April 30 when he was offered by Kent State.

At 6’3, 280, Baker is an aggressive player, but remains under control and makes sure that by game time he has his steps down.

“This season I believe I could have played better,” Baker said. “I’m amazed with what I had accomplished, but I still though I could’ve done better.”

Baker says he has been focused on staying in shape, working on football technique and spending time bonding with teammates before the season starts.

He says his parents and coaches have had the most impact to date on his football career.

“It was my mom who insisted on taking me on long road trips to camps and combines,” Baker said. “She would change her entire schedule just so we could go to a combine.”

About a month ago, Baker took an unofficial visit to Memphis and says he enjoyed the trip and liked their facilties.

He was recently introduced to Kent State offensive line coach Bill O’Boyle, who visited Eureka and took a look at his Hudl video, which later led to an offer on April 30.

He says he has had an opportunity to meet several college coaches who have come to Eureka to visit with the team.