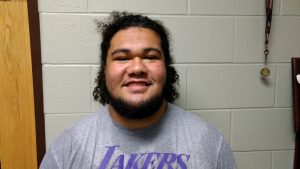 At 6’6, 350-pounds, Semau is a rare blend of massive size and athleticism, He’s an aggressive player that fires off the ball and likes contact.

“I don’t like to wait for someone to come to me. I use my size to my advantage,” he said. “I played a lot of basketball. It really helps with my footwork. I’m a very fast player for my size. I’m good at getting where I need to be in a hurry.”

Semau has become a fixture in the weight room over the years and has taken pride in improving his nutrition as he looks to shed some weight. He says he has also spent much of the offseason focused on improving his footwork.

“I work on this by myself and I work with ladders, cones and tires,” he said. “I’m trying to increase my speed and strength at the same time. I know what I need to do. I just have to do it.”

As a youngster Semau was a force on the basketball court but when he moved to Camdenton in eighth-grade he says football sucked him in.

“We noticed this is a football dominated town and with my size, you basically have to play,” he said. “The more I played, the more I started to enjoy it.”

Semau says Camdenton head coach Jeff Shore has been the biggest influence on his football career and has always brought a positive attitude.

“He believes in me, and he doesn’t doubt me and that made me like football,” he said.

Although he doesn’t pattern his game after any specific player, Semau says he watches film of opposing teams and players and tries to pick up the nuances of the game.

“I watch the OL to see how the QB can have a lot of time to get the ball where it needs to go,” he says. “I watch how the OL moves. Their footwork. What they do to make their offense work properly. What leg they use first. Where they step.”

Semau currently holds offers from Lindenwood, Northeastern State (Okla.) and Evangel and has heard from a handful of Division I schools as well and even attended a camp at Virginia.

He says getting an opportunity to play at Arkansas is his biggest goal.