Simmons, in the trenches with a Warrior Lineman from Washington 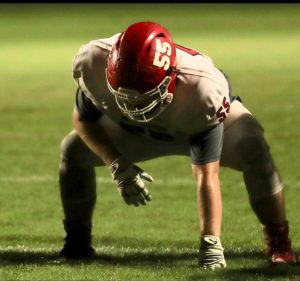 @JustinS26138641
A rugged and tough center and nose guard and a team leader at Washington High School in Washington, Oklahoma is Justin Simmons, a player to keep an eye on for the next level.

He is one of the most aggressive players you will find and when the trash talking starts he gets even more aggressive.

Justin—Would be my head coach. He pushed me through when I just wanted to end football and showed me how good I was.

Justin—Unfortunately I wasn’t able to attend any camps because if a moving situation but this upcoming summer should be one that coaches should keep an eye on.

Justin—I’ve improved on my stamina I am a fast linemen I run a 5.0 second 40 yard dash.

Justin—Some colleges I’d like to attend would be Oklahoma University, Texas Tech, Oklahoma State University don’t really plan on going to a division 2 school just because I want the schooling of one of those schools. But Texas tech would be the top one.

Justin—Some colleges should keep their eye out for Tyler Beller our center he’s an absolutely animal on the field.