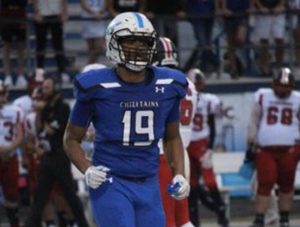 Meet Kandon Williams, a long sure handed TE that can put his hand in the ground or split out. A Crisp route runner that possesses a very good understanding of the defense lined up across from him. Williams has all the size and athletic attributes to be a major player of significance for the Sapulpa offense.

Kandon—would have to be my dad. Coming from a national championship at OU he knows all the ups and downs football wise and never gives me any bad advise

Kandon— last summer I attended 2 camps, Adidas rivals, and a UCO camp. I went to the OSU junior day. It really let me see that I wasn’t competing against just kids in Oklahoma but the whole country and needed to put in as much work as possible. I would say speed and mindset are the two biggest things I’ve improved on.

Kandon—The only school that has consistently mailed me is Texas State.

Kandon—I don’t really have a pregame ritual. I just like to sit at my locker and listen to music and keep my head straight.

My favorite song is “On me” by WFavorite Class

Six Star — Teammate likely to be a star in college

Kandon—Elijah Williams has the best chance at being a big star at the division 1 level.

Kandon—The hardest working teammate I have is Marcus Esparza.

Kandon—Tezohn Taft is a really exciting player to watch and I wouldn’t be surprised if he ends up getting some big time offers.