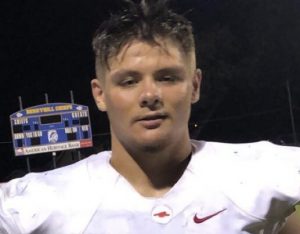 @KarsonAustin
Patience is a virtue….For Karson Austin that motto pays big dividens for the junior MLB at Fort Gibson High School. Austin, states “I let the game come to me instead of trying to force it.” Austin also has the athletic skills to back it up, 405 squat, 475 deadlift, 295 bench. Very impressive strength for the 5-11, 205 team leader.

The 5-11, 2015 defender packs a nice punch on defense for the Tigers. Look for big things from Karson in what has all the makings of a very good senior season.

Karson —I believe I’ve played ok at times and not as well at other, still a lot to learn. Need to be more consistent and stronger.

Karson —Trying to become a better leader on and off the field, I’ve also got a lot stronger which has helped me a lot.

Karson —My Dad Tell us about your summer, camps, combines, visits, etc.

Six Star — Tell us about the experience and what you were able to take away from it, what camps you attended?

Karson —I went to an OU camp a few years ago. There where so many athletes I realized I was going to have to work harder.

Karson —I went to Southern Nazarene University on an unofficial visit, it was exciting, the campus was really nice. I’ve talked with a few schools but SNU is the only visit I’ve had, Concordia, Bethel, Oberlin, Hendrix, Dickinson State, Defiance, and Grossmont I have talked to.

Six Star — What has been the best game you have had in your career and why:

Karson —Sallisaw, I had 12 Tackles and a fumble recovery. I think it was our best defensive performance of the year.

Six Star —Players to keep an eye on: