Muskogee on a Roll, Talented Ashley playing a the top of his game in junior campaign 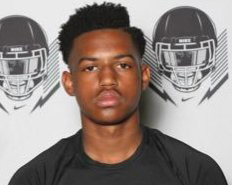 At 5’11, 160-pounds, Kaunor is fast, physical middle safety who is a natural born play-maker. He uses excellent speed to close the gap and assist on several tackles at or near the line of scrimmage. He is a smart player who reads plays well and has a knack for sniffing out plays.

He spent the offseason attending the Nike Opening and camps at Oklahoma State and Central Oklahoma.

“I feel like I’ve been playing as one of the top players in the state, said Ashley.” “I’ve improved on my footwork and technique on both sides of the ball.”

He currently have received interest from East Central.

Kaunor — Had to be my older brother Karrington Ashley.

Kaunor — My pregame ritual is praying before each game

Kaunor — My favorite class has to be College Speech Class

Kaunor — My best game was against Shawnee when I had 8 tackles, 1 touchdown, and 1 interception