DeMario, the Perfectionist Leading by example at Deer Creek 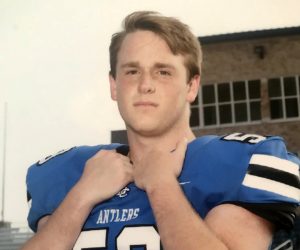 @KeeganDeMario
A lot of people say they are a perfectionist, but not many really can claim that title. Deer Creek’s Keegan DeMario is one such individual.

Keegan will be the first to tell you if there’s even the slightest mistake in his technique he work to try to fix my mistake as quickly as possible. That’s why his coaches and teammates view him as a very technical player. “If my snaps are perfect than it makes it easier on my teammates, “states DeMario. “It’s easier to catch and it’s easier to kick.”

Keegan —Due to a knee injury, I was unable to play the position I intended to play, but tried my best to be flexible at all positions I was rotated through. I felt I had most success on special teams as the long snapper.

Keegan —Throughout this off season, I became a better athlete, working around my knee situation in any way to still be able to be on the field. Our strength and conditioning coach, Coach Roberts, helped to convert this team into 6A athletes during the offseason. He was a tremendous addition to this team this season.

Keegan —My dad, Mike DeMario, has been my most influential figure in my football life. This is because he has been with me since I was 5 years old. He was there for the first time I put on pads, to the last game of my senior year. My dad constantly supported me emotionally and physically by always pushing me to be a better athlete.

Six Star — What camps did you attend. What did you work on over the summer

Keegan —Due to my knee injury, I was unable to attend any camps or combines. However, in the mean time I worked out with coach Roberts everyday trying to build the strength and support I needed to be able to play with my injury.

Keegan —At this time, I don’t have any college interest but am still seeking the opportunity to play at the next level

Keegan —was born and raised in Grand Rapids, Michigan and didn’t move to Oklahoma until my 5th grade year.

Keegan —My pre game ritual tends to be different from others. I like to sit in silence, listening to calming music, while others prefer to listen to hype up music.

Keegan —My favorite song is FYBR by A$AP Mob

Keegan —My favorite class is zoology because I find science to be really interesting.

Keegan —My best game of my football career was my junior year against Edmond Memorial. I had two sacks, and 8 tackles to help us come out on top with a win.

Keegan —THE Dylan Diaz. This kid knows how to play in any position on the field. He has such a great football IQ.

Keegan —The hardest working player on our team is Parker JohnsonParker
Johnson
LB | 6'2 | 225
Deer Creek | 2020. He is always working his butt off in the weight room, while also taking a leadership role.

Six Star —Teammate to keep an eye on